WildFire simplifies an organization’s response to the most dangerous threats, automatically detecting unknown malware and quickly preventing threats before an enterprise is compromised. Unlike legacy security solutions, WildFire quickly identifies and stops these advanced attacks without requiring manual human intervention or costly Incident Response (IR)
services after the fact.

WildFire offers a completely new approach to cybersecurity. Through native integration with Palo Alto Networks Enterprise Security Platform, the service brings advanced threat detection and prevention to every security platform deployed throughout the network, automatically sharing protections with all WildFire subscribers globally in about 15 minutes. The service offers:

Turn the Power of the Cloud Against Unknown Threats

WildFire has a unified public/private cloud-based architecture that maximizes the sharing of threat intelligence while minimizing hardware requirements. The architecture allows the service to be deployed from any Palo Alto Networks security platform, with no additional hardware, or as a private cloud option (WF-500 appliance), where all analysis and data remain on the local network.

Whether deployed as a public or private cloud, the WildFire analysis environment is shared across all security platforms on a customer’s network, as opposed to deploying single-use sandboxing hardware at every ingress/egress point and network point of presence.

Uniquely, WildFire can also detect unknown malware pervasively throughout the network. Wherever a Palo Alto Networks security platform is deployed now becomes a point of malware detection and prevention, including:

The first step is to detect unknown threats, but next you must automatically close the loop to prevent them from reaching the network. Once WildFire discovers a new threat, the service automatically generates protections across the cyberattack kill chain, blocking malicious files and command-and-control traffic. Uniquely, these protections are content-based, not relying on easily changed attributes such as hash, filename or URL. These advanced protections allow the service to block the initial malware, and future variants without any additional action or analysis. WildFire informs the protection of other Palo Alto Networks security services, blocking threats in-line through:

Customers with a WildFire subscription also get access to fully integrated WildFire logs and reports via the standard Palo Alto Networks user interface or through Panorama. This log integration makes it really easy to quickly tie malware to users, applications, URLs, files or other threats for fast incident response, and for modifying your policies to reduce future attack vectors. 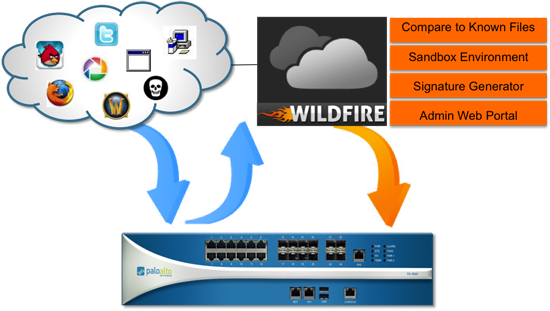